This blog post is part of a a blog post series where we use Deno to build different applications. We’ll go from CLIs to scrapping tools, among others. You can find the other posts here.

We previously explored some of Deno’s premises and how it addresses specific Node.js problems. But that’s not why we are here today.

Today we are here to build a CLI application with Deno.

The goal: compiling to a binary

What we’ll do today is to explore one of Ryan’s original goals when he first created Deno: compiling JavaScript code to a single binary.

As an admirer of golang (which heavily inspired Deno), Node.js’ creator loved the idea of having a complete toolchain as part of the runtime binary (linter, testing suite, dependency manager, and so on). On such a complete toolchain, the capability to build any application into a single executable binary couldn’t be left out.

Even though this feature was not present on version 1.0.0 of Deno, back in May of the last year, it was added on version 1.5 (October 2020), and it’s been improving since then. By itself, this feature isn’t something completely new, as there were a few third-party Node.js packages that did it before. The main difference is that it’s included in the main binary, making it a lot simpler.

This capability proves itself useful in many cases, but today we’ll explore one where we think it really shines, building a CLI.

By the end of the blog post we’ll have an application compiled to a single binary that can be distributed and execute in any machine, without external dependencies.

We’ll be doing using Deno’s version 1.7.0, and if you want to directly jump to the code, it’s available here.

The command line application we will build is one that makes it possible to check the weather in any world city.

We’ll use OpenWeatherMap (https://openweathermap.org/api) to get the data, and Deno to do all the rest. The code will be written in TypeScript, which is supported natively in Deno without external compilation steps.

The code itself is very straight-forward, as the CLI’s job is also quite simple. Here’s what it should do:

To do that, we’ll use several APIs:

This is how the final code will look like. GitHub.

If the imports still look strange to you (even though they are fully browser compatible), we explained them more in detail, in the previous article Adventures in deno land.

Put simply, Deno makes it possible for any JavaScript/TypeScript package with a HTTP URL to be directly imported.

Any questions regarding the available APIs, or how they work is delighfully explained in Deno’s documentation (https://doc.deno.land/).

Deno supports directly importing modules by URL in the code, and the documentation isn’t any different. By using the provided URL (https://doc.deno.land) plus the URL to a package, we get a beautifully designed page with the package types and documentation.

For instance, to check parse documentation we just need to navigate to https://doc.deno.land/https/deno.land/std@0.83.0/flags/mod.ts#parse, and this is what we get. 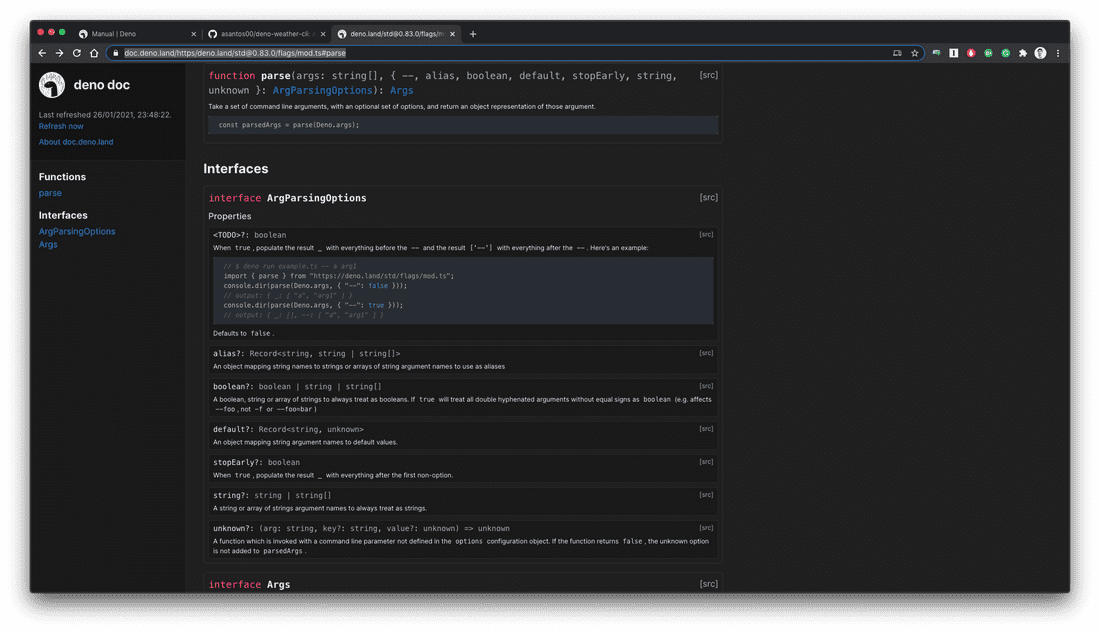 This is possible to be used with a direct GitHub link, ex: https://doc.deno.land/https/raw.githubusercontent.com/timonson/djwt/master/mod.ts

For the builtin functions, which include everything that’s made available by JavaScript itself (fetch, setTimeout, window, and so on) and the Deno namespace functions (like the Deno.env.get), we can use https://doc.deno.land/builtin/stable.

After having Deno installed on the system, executing the code is the simplest of tasks. We can just use deno run plus the path to the file we want to execute (in our case we’ve called it mod.ts).

To be able to get the program to run, we’ll need Open Weather Map API key, which you can get here

If you tried executing the above line, you might be getting some errors, here’s why:

As we mentioned in a previous article, Deno’s programs run in a sandbox. This makes all Deno programs safe by default by not giving them any access to the underlying system.

For programs that need to access specific features, like our Weather CLI, those permissions have to be explicitly sent.

In our case we’ll use --allow-net and --allow-env to give access to the network (only for a specific domain) and the environment.

And that’s it! The program is doing what it needs to.

The next step is to share it with our fellow developers, so that they can easily check the weather in their city.

We’re just missing the binary. Let’s do it.

Compiling into a binary

As we get close to the final goal of this post, we’ll compile the code we just wrote into a binary.

We’ll use deno compile command for that. Note that we’ll use the permission flags (--allow-env and --allow-net) to the compile command. guaranteeing that the generated binary has permission to access what it needs.

Please keep in mind that even though it works, this is still an unstable feature, and thus subject to possible bugs and changes.

And it emmited a binary named weather! We can now share this binary with whoever we want, and they’ll execute it directly.

This achieves our goal for this blogpost. We’ve explored Deno’s ease of use and the capability to build JavaScript code into a binary.

What you just read is part of a series of blogposts where we explore multiple Deno functionalities, from interoperability with Rust to static site generation, among others.

Today we’ve grasped the surface on one of the many possibilities Deno opens.

We truly believe that, by building on the shoulders of giants (TypeScript, Node.js and Rust) and adding a few things to the mixture, Deno has all it takes to stand out.

If you’re interested in knowing more about Deno and how to use it to build tools and web applications, make sure you checkout my recently launched book Deno Web Development. In the book, we carefully explain all the mentioned Deno features (and many others) while building real-world applications.

This article (and code) was written together with my friend Joni Oliveira from whom I deeply appreciate the support and constant enthusiasm to learn new things.

We’d like to hear what you think about it! If you have any questions, make sure you it us on Twitter or LinkedIn. I’ll leave the links below.

If you want to read more about Deno, check out the other posts in this series.

Get a once-a-month digest of my posts

No worries, I will not send more than 1 email per month, and I'll mail you only when there's new content.