On my last post, I wrote about my first adventure in Deno.land.

It was a fun one, the excitement of trying some new technology was always there. deno left me thinking about new possibilities and asking myself what am I going to build with it.

Last time around I have built a small twitter bot in order to scratch the surface of the standard library and to get to know deno a little better in deeper context than a simple “hello world”.

It was very well-received, way more than what I was expecting. It ended up being, at the time, my most read and reacted post ever. I guess I got quite lucky on the ”deno hype train”.

Back to what brought me here today. After exploring the standard library, module imports, simple permission system and dependency management, today I’ll explore the following topics:

If you want to follow the code, here you have it.

To complete the information from the last post about dependencies, I’ll write about lock files. They’re a standard practice in many languages in pretty much every production app. They’re used to describe an exact tree of dependencies, in order to make installations more repeatable, avoiding issues that may arise out of version misalignement.

To install the dependencies while integrity checking every installed resource, one can run:

The official vscode extension has been launched! However, it is the exact same that I have mentioned on my previous post. It simply got moved to the official repo, as the changelog states

It works very well, autocompletes and files imports are fine, as expected. There’s a small problem though, when you cmd + click on external dependencies, it does not detect the language, so the file appears without any highlighting.

I’m sure it will be fixed soon but it’s also a good oportunity for contribution that I might take, after I get the time to understand the code from vscode and the plugin itself.

Another of the advantages presented by Ryan in his talk was that Deno included a documentation generator on its toolchain. It doesn’t have (yet) a section on the website, but we’ll explore it a bit here.

Even though Deno has no install step, the cache lets you develop in an airplane (as you did with node_modules), as it loads the modules the first time and then uses the cached one.

While working on an airplane, what if you want to look at third party code docs? You can use your editor of choice, yes, but there’s an alterantive.

deno provides a cool way to see the third party code documentation without having to browse the code.

This outputs the methods exposed by the standard library’s http server.

Very neat, right? A very nice way of having an overview of the modules exported symbols.

To see the documentation for a specific symbol, one can also run.

You can use the documentation command to have an overview of your code’s exported modules, it works the same way.

The --json flag is also supported (however, not for symbols), and allows generating the documentation in the json format, enabling programmatic uses.

One great example of the documentation generation uses is deno runtime API.

It uses Deno to generate modules with the --json command and provides a really nice layout around it. We just needed to add typedoc to our modules, like what we did here.

As we talked on my previous post, one thing that deno got very well were permissions. They’re easy to use and secure by default. Previously, I’ve explained that in order for a script to be able to access the network, for instance, you’d have to explicitly use --allow-net flag when running it.

That is true, however, I was alerted by my friend Felipe Schmitt that in order for it to be stricter, we can use:

This will, as you probably guessed, allow network calls to api.twitter.com and from 0.0.0.0 but disallow all the other calls. Instead of allowing complete access to network, we’re allowing just part of it, whitelisting and blocking everything else by default.

This is now very well explained on the Permissions page, which is one of the documentation improvements that were added after the v.1.0.0 launch.

Running code in the browser

Another very interesting feature of deno, is the bundle command.

It allows us to bundle your code into a single .js file. That file can be run as any other Deno program, with deno run.

What I find interesting is that the generated code, when it doesn’t use the Deno namespace, is that it can run on the browser.

The possibilities for this are limitless. For instance, what if I wanted my API to generate an HTTP client for frontends to interact with it?

We can write that client in deno, reusing API code (and types). Here’s the code to get the popular tweets.

This code lives on the API codebase and it is written in deno. It uses the same types from the twitter client the API uses.

Having the API client living on the API codebase means that whoever updates the API can also update the client, abstracting the backend and API changes from the frontend code. This is not a deno feature but something that it enables via this bundling feature.

Then, we can run the bundle command and put the generated file in a folder.

It will generate the client.js file that can run on the browser.

For demonstration purposes we can create a public/index.html file with the following code.

This code uses client that was initially written in deno, and is now a js file.

Now, this public folder can be served by any webserver. Since we’re talking about deno, we can take advantage of it and serve the files with standard library’s file server.

We can now visit http://0.0.0.0:4507/ and use our very archaic frontend to query for popular tweets. With this, our code can use the client that was originally written in Deno on the frontend, to interact with the API. 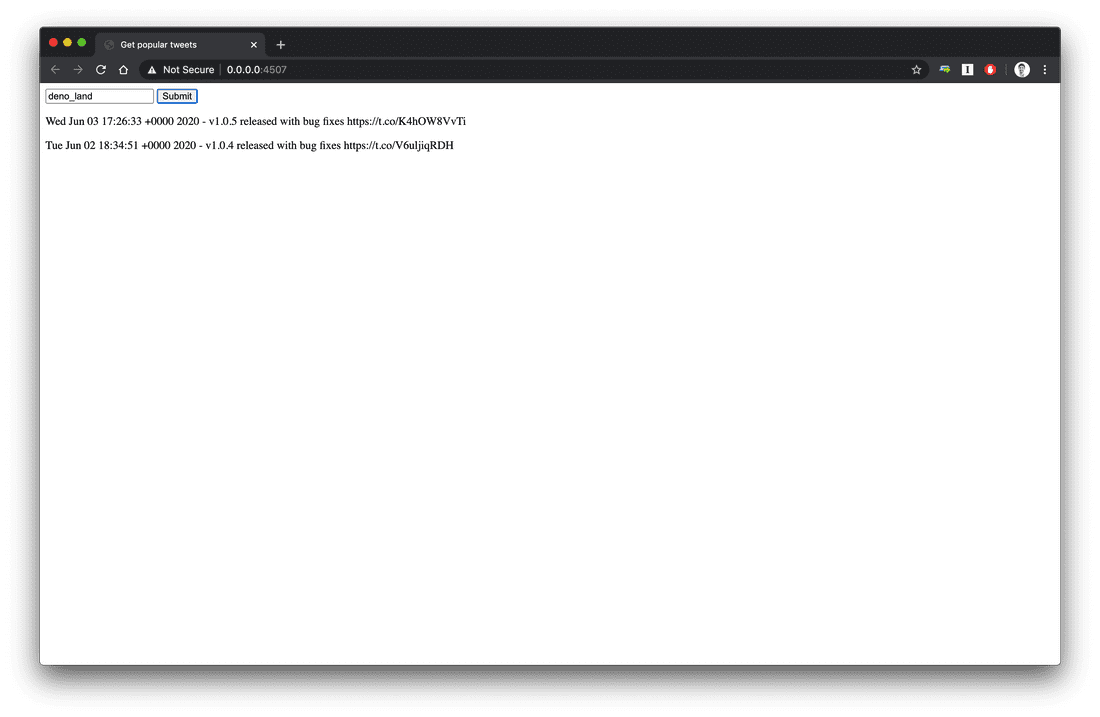 Following deno’s goal of shipping the essentials in a single binary, testing is obviously included. The documentation is, again, quite good on this. With the help of the doc command, it gets very straight-forward to write tests.

Let’s write a simple test to our “isomorphic” client we created a few lines above.

Deno.test will be used to declare the test body, assertEquals will be called to make the assertion. In order to mock the server responses, we’ll spin up a server using standard-library httpserver_.

We expect that, the popular method from the client calls /popular/:twitterHandle. Let’s create a test for that.

Our runServer util is a very simple function that just spawns a web server that closes after the first connection.

We can now run the test. Remember that everytime we run a deno program we need to pass the permission flags.

It will run as test every file matching the following regex {*_,*.,}test.{js,ts,jsx,tsx}:.

TLDR: It runs every file that has test in its name and ends with one of the mentioned file extensions.

If the test is failing, we’re presented with a nice diff.

In order to run just part of the tests, the --filter flag can be used.

And a path can also be sent as the last argument

You can follow all the listed changes related to tests on this commit.

And with this, we have pretty much everything we need in order to write compreensive tests. Again, the essentials are there, we can (and probably will) create a couple more test utilities composing on top of the standard library, but for simple tests as the one we just wrote, this is enough.

On our second adventure, we went a little further than just presenting the language.

We explored some other parts of the runtime. From testing, generating documentation, lock files, stricter permissions, to generating javascript code and running it on the client. All of them are features we considered useful when writing production code. We let benchmarks out for the next adventure 😉.

We can’t forget that we did all of this with the toolset that is included in deno, no libraries were used.

This doesn’t mean that developers will not use and write libraries. It means though that the standard library is very well written and easy to use. This opens the door for developers to write powerful, and meaningful abstractions on top of it.

Together with the standard library, the toolchain offered with the main binary proves itself very complete, aligned the goal of Only ship a single executable, mentioned on deno docs. I’d say all the essentials are there and you don’t have to worry about tooling.

This adventure took a little longer that expected. Thanks for reading it.

I hope it was as fun reading as it was for me exploring it. I’d love to hear what you have to say about it and answer all the questions you might have.

Get a once-a-month digest of my posts

No worries, I will not send more than 1 email per month, and I'll mail you only when there's new content.